Isao Takahata is fairly well known for his 1988 animated feature, Grave of the Fireflies, which is a heart-wrenching look at two orphaned children struggling to survive in World War II Japan. That film was hailed by many as a masterpiece of storytelling, and a touching look into the minutiae of war. Others found it too horrifying and sad to watch. I enjoyed Grave of the Fireflies, and would likely appreciate it more today than I did when I first watched it, but for me The Tale of Princess Kaguya is Takahata’s finest piece of work, and one of the most beautiful films I’ve ever watched.

The Tale of the Princess Kaguya is based on an ancient folktale, more often called The Tale of the Bamboo Cutter. In the myth, a poor bamboo cutter cuts open a glowing tree and finds a palm-sized princess within, whom he takes home and raises, with his wife, to adulthood. The child grows and becomes famous for her beauty and is sought out by powerful men in the land, including the emperor, for marriage. There is more to it, but that’s the gist. That it’s more commonly referred to as The Tale of the Bamboo Cutter is strange given that the story is about Kaguya, first and foremost, and her adoptive father is merely support. I applaud Takahata’s use of the feminine title.

Takahata’s interpretation is true to the myth and to history, down to the smallest details like how many layers of clothing women would have been wearing for specific occasions. What is perhaps the most extraordinary aspect of the film is that its animation feels mythological, and its a style that I’ve never seen before. You can see the pencil lines on the screen, can watch them move and wriggle, and marvel that despite these obvious creation tools it all feels so incredibly real.  I wasn’t exaggerating when I claimed this to be one of the most beautiful films I’d ever seen. It’s at times breathtaking, and I am conflicted between wanting to see more animated stories in this fashion and never wanting to see it reproduced.

The story itself is remarkably progressive, at least in this updated version. Princess Kaguya wields all the power, and while she at times struggles to please those around her, she is never without control. One of the best lines in the movie comes when the Princess declares that no one will own her, defying traditional gender roles in a way that may have been surprisingly common during this era of Japanese history. The myth originated in the 10th century, but myths have a way of existing outside the boundaries of time. That Japan once had female empresses and worshiped a goddess in the form of Amaterasu suggests that Kaguya’s willfulness is not out of bounds. That she is, in the end, a celestial creature is also a relevant fact.

It is Kaguya’s marvel at the wonder of life that truly makes this film shine. This is particularly poignant if one considers the subtitle of the movie, A ‘Princess’ Crime and Punishment,’ which suggests that Kaguya’s time on Earth is a consequence of some negative action she committed elsewhere. Few prisons offer the kind of delight that Kaguya takes in simply being alive, in running and splashing through streams, in dancing with animals, and in rough-housing with her childhood friends. When Kaguya laughs, it is infectious, and as I watched her story it made me wonder if I’d perhaps lost some of my ability to feel such aliveness. Kaguya is voiced by Aki Asakura, who performs marvelously in this role, and I’d encourage anyone who wishes to see this film to watch the Japanese version for (so many reasons). To watch an important cultural myth in a language not its own borders on insulting.

Accompanying an animation and story of singular beauty is a soundtrack that evokes an entire range of human emotion. When Kaguya is fleeing the capital, we can hear her pain. When she is plucking strings of the koto, a kind of Japanese lap-harp, we hear her sadness. When she is laughing, a music all its own, the music laughs along with her. I’ll admit to not often noticing music in films, even though I’d certainly notice its absence, but I feel as though the score of Kaguya enhances the film in a way I’ve never experienced. It feels traditionally Japanese, but in the most sincere and flawless way. It did not surprise me in the least to learn that the man responsible for nearly bringing me to tears was Joe Hisaishi, one of Japan’s greatest living composers and a familiar name to any Hideo Miyazaki aficionado.

It saddens me to know that The Tale of the Princess Kaguya is Isao Takahata’s last film. He has an entire lexicon of work for me to personally enjoy as I’ve only seen the two aforementioned titles, but I am disheartened at the cultural loss for the world as I would be were any great artist to die. With Takahata and Miyazaki both retired from their craft, a great void looms in the Japanese animated film scene, and one that will be incredibly hard to fill. They both have their proteges, and a few of these understudies have already produced new films, but I feel the loss nonetheless. The other side of this coin, at least where Takahata is concerned, is that to leave the craft at the height of your ability is a marvelous thing, and with Kaguya, Takahata has soared into retirement in triumph. 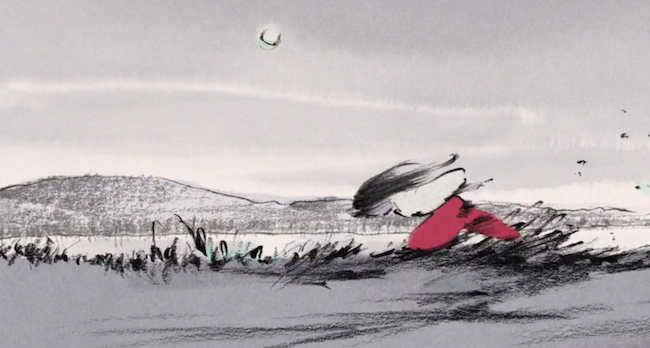