During the few times this past summer when I’d visit White Yarrow Farm, Farmer Dale and I would wax poetic about all things Japanese. We would most often talk while harvesting potatoes, sometimes having hours-long conversations about film, literature, pop culture, and of course, food. More than once Dale would talk whimsically of his favorite Japanese film-maker, Yasujiro Ozu. He liked Kurosawa well enough, but for Dale it was Ozu all the way, and Ozu’s masterpiece, and what Dale would tell me is one of the greatest films in Japanese history, is Tokyo Story. It was without hesitation that I added it to my curriculum.

I’ll admit that once begun, it took me a while to make it through Tokyo Story. It’s not a fast-paced movie, and in an almost Finnegan’s Wake-like method of storytelling offers a glimpse of an ordinary Japanese family during the turn of the century, a time in Japan that was both mournful but full of hope. I didn’t sit down and absorb it all in a single sitting, as maybe I should have. In fact, it took me four or five sittings. I only just finished it this week, well beyond my intended timeline.

Do I find it to be the masterpiece that Farmer Dale claimed? That’s a complicated question. I think the answer is mostly yes.

Tokyo Story is about a husband and wife traveling to Tokyo to see their three adult children, as well as the widow of one of their sons who was killed in the war. They leave behind their youngest daughter at home, herself grown but living with them still. The Tokyo of the 1950s is a turbulent place and a far cry from the pastoral life they’re used to. They find themselves shuffled from one family member to the next, and even sent away to a hot springs because everyone seems too busy to deal with them. Eventually the couple go home, having experienced the chaos that is Tokyo.

My interpretation of the film is that its a lament for what was lost in Japan following World War II. Much was gained, certainly. Progress was made, and Japan would eventually become one of the largest economic powers in the world, but many of the traditions and values that formed the country over its last two thousand years faded away. This has become a central theme to many of the books I’ve read over the course of my curriculum and seems to have reached a tipping point in the 21st century; that is, the loss of something sacred. Maybe I interpreted Tokyo Story in this way because of my other influences, but the sadness evoked by this film can not be denied.  I feel it even as an American living thousands of miles away and almost sixty years down the road. 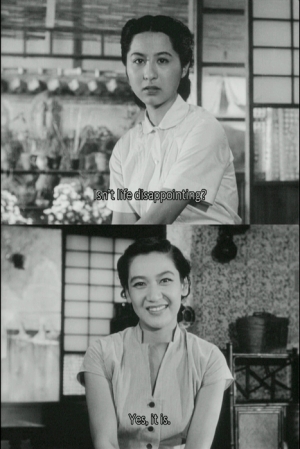 Tokyo Story is a very different film from any that I’ve seen. I’ve never gone in much for older films, and once had a particularly stupid phase where I’d never watch anything made before the year 1980. I’ve evolved, thankfully. There are unique elements of style to this film, cinematography that I’d never seen before. There are many straight-on shots of characters faces, a way of looking at someone that feels slightly unnatural (how often do we look straight into someone’s face from two feet away?). The performances also feel strange, though immensely complicated and often brilliant. During common exchanges, the acting seems stilted and overly polite, but there are times of real emotion from Noriko, the mother, and the father, that are as good as anything I’ve ever seen on film.

Chishu Ryu plays Shukichi, the father, and while the majority of the film sees him formal and polite, there is a moment towards the end where with a single look he conveys the perfect sense of grief and heartache that the film seems to build to. Cheiko Higashiyama, who plays the mother, has several of these moments in the film, times when she isn’t interacting with another character but seems enveloped in her own feelings in a way that only those of us viewing can see. The other notable performance, and likely the most famous, is Setsuko Hara, playing the widowed daughter-in-law Noriko. Like Ryu and Higashiyama, Hara’s performance is largely polite, formal, and reserved, but her ability to transform this decorum into raw, open vulnerability is beautiful to witness, and several of her lines are the most powerful by far.

I said in a previous post that I wish I had read Premodern Japan before attempting anything else in this curriculum, and I think that holds true even having finished and appreciated Tokyo Story. I don’t know enough about this time period in Japan’s history to appreciate it as much as I think I could. However, I can recognize that this film is a window into a culture and a time that I’ll likely never experience, and for that it is invaluable. That it manages to evoke a true sense of the human condition, and all the traps and pitfalls of family life, only sweetens the deal.