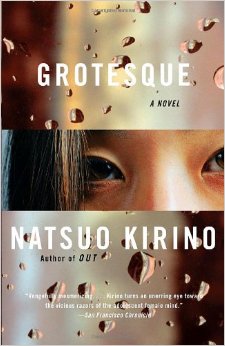 I’ve never been drawn to murder mystery novels, particularly those of American stock. I loved Edgar Allen Poe in high school, and still do, but feel that most of the current murder fiction out there is predictable and mediocre. Our national fascination with murder mysteries is itself incredible. We are a country both awe-struck and terrified of death, yet we can’t get enough of it. I read my first Japanese murder mystery novel a couple years ago, and it was Miyuke Miyabe’s All She Was Worth. It’s subtle, poignant, and literary. It also left the mystery itself completely open-ended, a strategy that had me half-delighted and half-frustrated. It was decidedly un-American.

Natsuo Kirino is contemporary to Miyabe, but their styles are markedly different. Kirino is not as subtle, perhaps not as literary, but she also takes a potentially typical murder mystery and inverts it. She reveals the killer of Grotesque within the first fifty pages, leaving the rest of the novel not a history but an explanation of how someone could both murder and come to be murdered. It’s every bit as engrossing to me as Miyabe’s open-ended All She Was Worth, and it may even end up being more memorable.

Grotesque tells a story through the eyes of four individuals. The character with the most word-time is nameless but takes on the role of narrator, and through her we hear the voices of the victims and perpetrator. Her older sister, Yuriko, is one of the unfortunate. One of her classmates from school, Kazue, is another. Zhang, the accused, is the final viewpoint through which Kirino tells an incredibly sad and pervasively “grotesque” story.

The central pivot point around Grotesque is Yuriko’s beauty. Yuriko, as well as her older sister the unnamed narrator, is half-Japanese, half-Swiss. Yuriko inherited the beauty of both races, while the sister received none. The word beauty is an understatement as Yuriko is repeatedly described as unworldly beautiful, distracting to men and women alike, an oddity, in some ways a perversion of the natural order of human appearance. She’s too beautiful. The people in her life are swept up in this beauty, and the fate of all involved seems tied to it. That Yuriko becomes a prostitute is in many ways inevitable. When someone is only ever seen as a beautiful object, their life options are oddly limited. She also remarks in one of her journals that for a nymphomaniac, there could be no other profession.

That Kazue, an anorexic, friendless girl with a drive to succeed only matched by her destined ordinariness, becomes a prostitute as well stands in stark contrast to Yuriko’s fate. While Yuriko is born craving sex, Kazue has no enjoyment in it, but seeks men out for the attention and misdirected praise they offer her. That both should fall to the same cruel fate and killer is more poetry than any necessary literary device.

Even Kazue’s descent into the underbelly of the Japanese sex trade is in direct effect of Yuriko’s beauty, poignantly rendered by her costume, which seeks to emulate the look she remembers worn by beautiful Yuriko those years long ago at their prestigious high school. The high school also becomes a central aspect of the story given its formative era in all three of the women’s lives.

One aspect that sets Grotesque apart from anything else I’ve read is it’s almost complete lack of any identifiable or redeemable character. Flaws in development are necessary in good writing, but the degree to which the characters in Grotesque are damaged is monstrous (a word that itself is used to describe almost every character at one time or another). At the same time, they are completely believable characters. They are ridiculous and uncouth or disgusting, but at no point while reading the book did I think, “no one like that actually exists.” I think such people absolutely walk and talk among us, people whose lives are hyperbole, whose thoughts seem so far removed from our own that we wonder if we exist in the same genus.

The actual writing of Grotesque is its weak point, even if the storytelling is as strong as anything I’ve read this year. I’m forever uncertain whether poor writing is a result of poor translating when I read something from another language. There are repetitions in the text that stumble over one another, and Kirino has a habit of asking her reader questions that often becomes disruptive. However, it’s a testament to her ability to create interesting characters, at least in the circus-freak sense, that permits the story of Grotesque to flow onward. I was never bored reading this book, which could easily happen in a story where the mysteries are solved and all we have is a look into the lives of those amidst it. In a way, the mystery of Grotesque has little to do with the murder of two women. It’s actual mystery is how these two women existed, how they were formed, and what their lives meant to those around them. For me, that’s a much more compelling mystery than whatever cheap trick bestselling American authors are doling out these days.