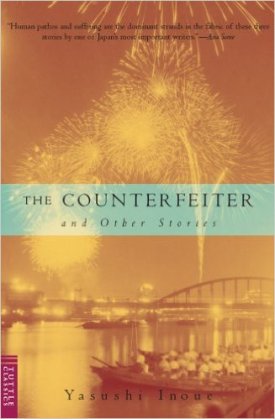 I read The Counterfeiter over the better part of a day. It’s a short read at a mere 128 pages, and it’s a book of short stories. It’s divided up into three sections, with the title story, The Counterfeiter, taking up most of the book’s real estate. Obasute and The Full Moon are shorter, and constitute the back half of the book. I’ll take this story by story, but it’s not a huge book, nor an intense read, so this review may run a little short.

The Counterfeiter is far and away the strongest and most interesting of the three tales. It takes places in post Meiji-era Japan, so I found comparisons to The Master of Go almost immediately. Both hearken to a lost age and struggle with modernism and the efforts to maintain tradition. The Counterfeiter follows a biographer as he travels around Japan during and after World War II, chronicling the life of Keigaku, a famous artist. As he struggles to find information about his subject, he becomes more interested in a man named Hosen Hara, accused by many in the art world of copying the paintings of Keigaku. As the story progresses, it becomes Hosen Hara’s biography, and Keigaku, while still remaining the subject of the narrator’s eventual work, becomes a background character who serves as constrast.

Hosen Hara is the more interesting man, for the obvious reason that he is flawed. Keigaku is the consummate perfect artist. He has never made a mistake, has won all the awards, and is distinguished in his field. Hosen Hara, who befriends Keigaku at a young age, lives forever in his friend’s shadow. He is the Salieri to Keigaku’s Mozart, never matching and always chasing the genius of his rival. His efforts to counterfeit the paintings of Keigaku are Hosen Hara’s attempt to prove to everyone that he is just as good as his friend. In many cases the forgeries are good enough that they fool almost anyone not trained to spot a fake.

By his life’s end, Hosen Hara has mostly given up painting and instead makes fireworks at small villages in the countryside. This doesn’t possess the prestige of painting, but Hara finds in it something he can attempt perfection in. I thought this theme of chasing perfection was relevant, especially in our own time when the slightest mistakes can ostracize a person from everything society views as vital to a good life.

Obasute is shorter, and slightly less fleshed out, but I really enjoyed it’s themes of isolation and myth. Mount Obasute is a real spot in Japan, and there is mythology of it being a place where people would drop off the elderly, instituting a banishment for the crime of being old (the term obasute literally means to abandon a parent). Whether or not this ever happened is not made clear in the story, but the very thought of it is possibly the most depressing thing I can imagine. We have an entire system of social security in the U.S. that is counter to the very idea of this, and abandoning people who most need us seems to me inhuman.

The story wraps around this mythology. Central to the narrative is a family, and as the story progresses, each family member seems to desire being taken to a place like Mount Obasute and dropped off so that they can finally be alone. I’m reading Precarious Japan right now, and much of it deals with a very real problem called hikikomori. Hikikomori are young people who willingly cut themselves off from society, often not leaving their room or dwelling for long stretches of time. They are social outcasts, willingly, and possess a social anxiety that seems crippling. I thought of this problem, these hikikomori, while reading Obasute. It takes place after World War II, a time in Japan where everything, social, political, and moral, was breaking down. The booming Japan of post-Meiji times had been shattered, and while it would rise again economically, for a long stretch Japan had no center. The family members in Obasute could think of nothing better than abandoning the world and living alone on a mountain, much like some young folks in Japan today can think of nothing better, in an era where capitalism rules the world, than locking themselves in a room and ostracizing themselves from the madness.

The Full Moon is the story I found less captivating than the others, though it still dealt with interesting themes and carried in it that post-war tragedy felt throughout the entire collection of stories. The Full Moon chronicles the rise and fall of the president of a corporation, a relatively new phenomenon in Japan at this point. This story actually reminded me a little of The Wolf of Wall Street, both for the corporate narrative and because it manages to detail the life outside the office, one that is often secretive and full of scandal. It’s not as strong as the other two stories, but is still an interesting window into the life of a 1950s corporate man of post-war Japan.

This collection of stories was, I think, a decent introduction to Inoue. Nothing in it made me want to read his entire lexicon right away, but I do want to explore some of his longer works, particularly in light of The Counterfeiter story being the strongest of the three.